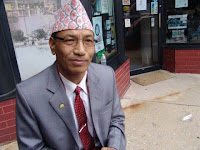 Kathmandu, March 16:  Federal Socialist co-chair Rajendra Shrestha has welcomed the recently forged 11-point agreement between government and CK Raut. Speaking in a programme organized in State-3 here today, leader Shrestha however said that some points of the agreement are abstract and should be interpreted by the government.

On another note, he suggested the government to hold talks with Netra Bikram Chand-led party to address the political demands politically.