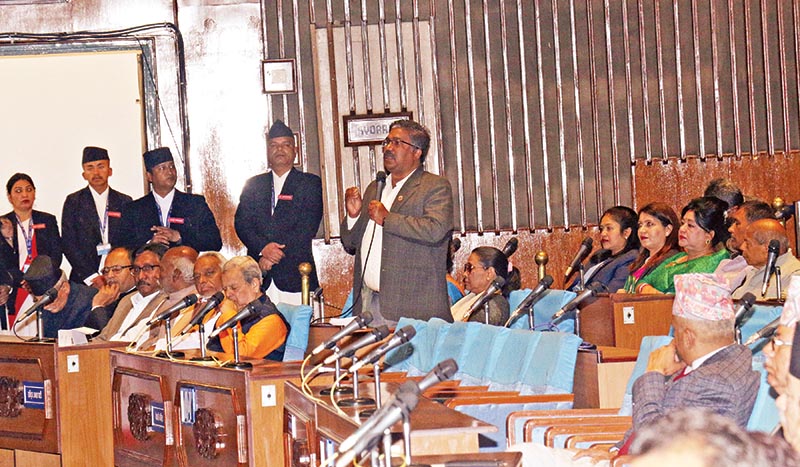 Kathmandu, March 17 : Lawmakers of Rastriya Janata Party (RJP)- today obstructed the House proceedings, demanding the release of the report prepared by the commission formed under coordination of former justice of the Supreme Court, Girish Chandra Lal to carry out investigation into the alleged cases of human rights violations during the Madhes movements.

The RJP-Nepal lawmakers, shortly after the commencement of the House of Representative’s session, stood from their respective seats as a gesture of protest. They said they would not allow the House to operate until the report was made public.

Demanding time from the Speaker, RJP-Nepal lawmaker Laxman Lal Karna said,” the report on the study about movements held in several times in Madhes and other issues concerning the human rights was yet to be unveiled by the government  and in the context Resham Chaudhary has been already in police detention.”

The  erstwhile Nepali Congress President Sher Bahadur- led government on September 18, 2016, had formed the commission under coordination of the SC former judge to probe 'atrocities' occurred during the  Tharuhat and Madhes agitation. As the party said, the commission submitted its report to the government on  February 12, 2018.

In response, Speaker Krishna Bahadur Mahara   said that the government's attention was drawn towards the issue and the government was serious towards that end.
Following this, the HoR meeting was put off for 10 minutes.