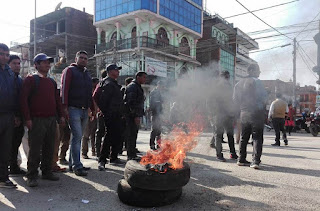 Jan 18 : A shutdown continues in Dang district today also in protest against the government’s decision of making Rupandehi as temporary capital of Province No 5.

Locals have been demonstrating at different places of the district under the leadership of a concerned committee to make Dang as provincial capital. Vehicles operating on long and short routes have come to a standstill as well as educational institutions, industries and markets remained completely shut from early this morning.

Vehicles have been stopped at Bhalubang and Ameliya as Dang road section has remained completely closed.

Member-Secretary of the Committee and Dang President of Federation of Nepali Journalists, Sabin Priyasan, said that the indefinite general strike would be continued until the government corrects its decision.

The Committee had on Wednesday night made various decisions including making the agitation strong.

Meanwhile, an all-side meeting is taking place in Ghorahi in this regard.