Home » English » Maithili should be language of official use in Province 2: Rajbiraj Declaration

Maithili should be language of official use in Province 2: Rajbiraj Declaration 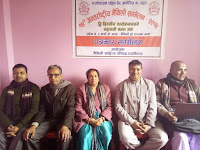 Rajbiraj, Dec 25: The 15th International Maithili Conference has concluded in Rajbiraj, issuing the Rajbiraj Declaration containing a 13-point demand which includes making Maithili as the language of official use in Province 2.

The Declaration was launched at a press conference organised here today by the Conference Organizing Mian Committee.

Maithili should be used as the language of official works in the new structure to be formed now as Maithili is the language spoken by a majority of the population in Province 2, reads the Rajbiraj Declaration.

Likewise, the conference has suggested naming Province 2 as the Mithila Province. The Declaration also calls for declaring the region from Jhapa to Birgunj as the 'Mithila Tourism Zone' by preserving and promoting the places of cultural, archaeological and historical importance which lie in this region.

It also calls for digital archiving of the Mithila folklore and developing the places of origin of Mithila legendary heroes as tourism sites from the government level. Among the demands contained in the Declaration are making Maithili a compulsory subject at the basic and higher education levels in Province 1 and Province 2 and the need for taking initiatives at the governmental level for the promotion and protection of the Maithili literature, culture and tradition.

Around 200 linguists and culture experts, litterateurs and researchers participated in the two-day conference. The 16th International Maithili Conference will be held in Janakpur of Dhanusha district.