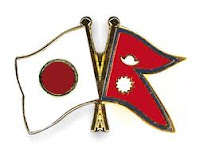 , Dec 16: Japanese Ambassador to Nepal Masashi Ogawa hosted a reception in the capital on Friday on the occasion of the 84th birth anniversary of Japanese monarch Akihito.

Present on the occasion were Vice-President Nanda Bahadur Pun, ministers, former Prime Ministers, former ministers, government high-ranking officials, distinguished personalities and Japanese nationals.
and had established their diplomatic relation in 1956.
Welcoming to the guests present on the occasion, Japanese Ambassador Ogawa said is a good friend of and it has been providing support to 's efforts for economic, social, cultural and educational development.

He also pledged to continue with the support for the development of in future.