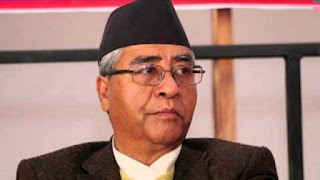 Kathmandu, Dec 16: Prime Minister Sher Bahadur Deuba has said that he was eager to hand over power as soon as possible.

In a meeting with CPN (MC) Chair and former Prime Minister Pushpa Kamal Dahal 'Prachanda' at the Prime Minister's official residence in Baluwatar this morning, Deuba stressed on the immediate endorsement of the bill relating to the National Assembly elections, currently at the Office of the President, according to Deuba's Coordinator Govinda Pariyar.

On the occasion, Deuba congratulated Chair Prachanda on the success achieved by the left alliance in the recent election to the House of Representatives and State Assemblies.

Prachanda also urged Prime Minister Deuba to take the initiative to hold a discussion among the major parties for a way out on the issue of the National Assembly elections.