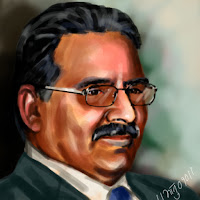 Kathmandu, Dec 19 : CPN (Maoist Centre) chair Pushpa Kamal Dahal ‘Prachanda’ has been urged to immediately take the unification process between the party and CPN (UML) to a logical conclusion.

A joint delegation from the both political parties’ youth wings--Youth Association of Nepal and Young Communist League (YCL)--reached the Dahal’s private residence at Lazimpat to congratulate him on the majority victory of the left alliance in the recent elections to the House of Representatives and State Assemblies, took the time to call on him to give a meaning to such achievements.

The delegation insisted that the party unification issue should get a logical to prove the   electoral victory meaningful.

The victory of the left alliance in the election to the House of Representatives and State Assemblies was the reflection of notion that ‘unity is strength’, they said, calling upon Dahal to take the leadership for ensuring political stability and bringing economic progress to the country.

Stating that the Nepali people endorsed the left alliance through the recent polls, they urged Dahal to commence ‘meaningful’ dialogues for the unification, according to YCL chair Ram Prasad Sapkota.

In response, leader Dahal informed the delegation that efforts are in place to institutionalize the endorsement of the left alliance from the people’s level.

“People’s mandate that the left alliance got through the elections has already become the people’s property, and support and cooperation from every quarter is required to take the unification process to a logical end,” Dahal said.

He further pledged to leave no stone unturned to pay back the people for their valuable ballots by meeting their aspirations for peace, political stability and economic prosperity.

Underlining the vital role of youths to change the fate of the nation, he was hopeful of achievements capable of revamping Nepal with a couple of years.

Likewise, intellectuals and professionals from different walks of life honoured Dahal today applauding him for his contributions to making the left alliance victorious in the elections.