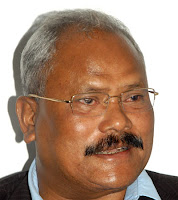 Inaruwa, Nov 9 : Nepali Congress leader and Deputy Prime Minister and Minister for Federal Affairs and Local Development Bijay Kumar Gachhadar asserted that NC victory is a must for democracy in the country.

Leader Gachhadar said this while addressing the election assembly held at Duhabi of Sunsari on Wednesday.

There is no alternative of NC win for safeguarding democracy and realizing the dreams of freedom fighters and martyrs of the country who fought for the sake of democracy and civil liberty.

The country will see economic prosperity only when democracy becomes stronger, he said, calling for the voters to cast votes to NC for democracy.

He also said that the communist alliance is opting for bringing authoritarian regime in the country which would never be acceptable for them.