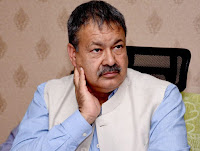 Government spokesperson and Minister for Information and Communications, Mohan Bahadur Basnet said that the Cabinet meeting also decided to determine the constituency of the backward communities and minority communities for the purpose of the election of the members of the State Assemblies, and have that published in the Nepal Gazettee.

He said a decision has been taken by the Cabinet meeting to constitute a high-level organizing committee in connection with the Eighth Non-Resident Nepalis Association (NRNA) Global Summit to be held in Kathmandu on October 14-16.

The government is to delegate authority to Durga Bhandari for signing on the political declaration on the reform of the United Nations.

Likewise, the Council of Ministers today has delegated authority to Deputy Prime Minister and Minister for Foreign Affairs, Krishna Bahadur Mahara, to sign on the Convention on Banning Nuclear Arms.
The meeting, bearing in mind the detection of facts that hospitals are recording increasing incidents of (untimely) deaths due to negligence of doctors and as there are cases of serious consequences on patients' health because of such negligence, decided to direct the Health Ministry to prepare the required bill making sure that the doctor responsible for neglectful death is made to pay the compensation to the victim, and to present the document before the House.

Likewise, the meeting has decided to appoint Chhakka Bahadur Khadka as the communications expert at the Ministry of Information and Communications.  As per the meeting agreement, the bill relating to the Rapti Institute of Health Science - 2074 BS shall be presented to the Legislature- Parliament, according to Minister Basnet.