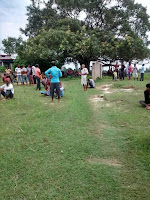 Rajbiraj, Sept 18: A fake voter has been arrested from a polling booth at Shambhunath Municipality in Saptari in the course of voting in the third phase local level election underway in Province 2 today.

The arrested is 19-year-old Sanjaya Chaudhari of the same locality, according to Superintendent of Police, Mukesh Kumar Singh.

Sanjaya, who had turned up at the polling booth to cast ballot in the name of one Durgananda Chaudhari, was found by the election officials. He was then arrested by the security personnel assigned on election duty there, Singh stated.