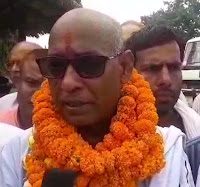 Dhanusha, Sept 24 : Rastriya Janata Party (RJP)-Nepal has been elected to the post of mayor and deputy-mayor of Janakpur Sub-Metropolitan City.

Similarly, Rita Jha of RJP-Nepal won the election to the post of deputy-mayor with 17,147 votes while her nearest contender Nilam Karna of the NC garnered 10,605 votes.

Out of 25 wards of the Janakpur sub-metropolitan city, RJP-Nepal won the election in 12 wards, while Nepali Congress in seven, Federal Socialist Forum Nepal in three, CPN (UML) in two wards.

Similarly, an independent candidate also won the election in one ward.