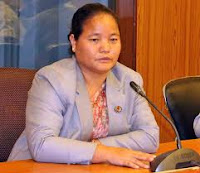 , Aug 9: Speaker Onsari Gharti called on President Bidya Devi Bhandari at the Office of the President in Sheetal Niwas on Tuesday.

During the meeting, matters relating to contemporary political issues, parliament activities and the like were discussed, according to the Speaker's press coordinator Basudev Sharma.

On the occasion, the President inquired about the status of various bills under consideration in the parliament, the special features of those bills and the time to be taken to have them passed. She also urged the Speaker to arrange time to discuss in the parliament the annual reports submitted by various constitutional bodies.