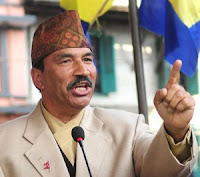 , August 8: The Rastriya Prajatantra Party has expelled 19 leaders including office-bearers and central members for contributing to create a division in the party.

The central committee meeting of the party on Monday decided to expel them from general membership for six years.

The meeting chaired by party President Kamal Thapa concluded that the party division in six months following the unity convention was sad and unfortunate, according to spokesperson Bhuvan Pathak.

The meeting has also appealed to all party leaders and cadres to not be deterred (by the division) and work to build a strong nationalist democratic force.