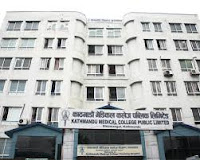 Kathmandu, Aug 9: The Sinamangal-based Kathmandu Medical College of capital city has paid half million rupees as compensation to the family of a nine-year-old patient died who died due to wrong treatment at the hospital.

Sunita Basnet was taken to the hospital after her leg was broken, falling from the bed. Along with bandage, the hospital prescribed a medicine named Flexon. Discharged from the hospital the same day, the girl was taken back to hospital Monday evening after she showed various problems including swollen stomach, but in vain.

Elder father of the victim, Rabi Basnet, accused the hospital of administering wrong medicine which resulted in side effects. The family and relatives of the dead one picketed the hospital and chanted with the demand of action against the doctor and proper compensation since early Tuesday morning.

After the hospital agreed with the victims' side to provide Rs 500,000 as compensation and probe in the treatment, the victim's side withheld the protest, said administrator Dr Prakash Bhattarai.

He however claimed that the hospital failed to save the child as the family did not bring her immediately after she showed side-effects.

He suggested that in case any patient feels discomfort with the prescribed medicine, he/she should be taken to hospital immediately.

It is noted that the hospital's pharmacy was sealed on Monday after a four-year-old child died with the intake of date-expired medicine sold by the pharmacy.