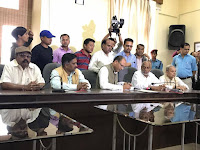 Kathmandu, July 7: Rastriya Janata Party (RJP) has submitted an application to the Election Commission of Nepal (ECN) for registering the party in the Commission today.

The RJP leaders reached the Commission's office at 4: 45 pm to formally submit their application.

Present in the Commission were RJP's leaders Mahanta Thakur, Rajendra Mahato, Mahendra Prasad Yadav, Anil Jha and Raj Kishore Yadav among whom member of the RJP presidium Thakur submitted the paper to the Acting Secretary of the Commission, Maheshower Neupane.
Soon after that, their applications were recorded as registration number 8366.

The party has proposed 'Umbrella' to be its electoral symbol.

The local levels election held across the country except eight districts in the southern plains of Province No 2 has created moral pressure on the political parties concentrating Madhesi politics.

The Madhes-centric political parties have continued agitation, showing dissatisfaction on some contents of the constitution promulgated by the C0nstituent Assembly.

It is learnt that they delayed much in registering the new party, as they witnessed dispute on finalizing the statute of the unified party.

Leader Thakur after exiting from the Election Commission, said, "We've submitted necessary documents, including the party statute for the registration of the unified party."

He however said the Government has not held dialogue positively. "Our demands have not been met. So, we don't participate in election at present circumstance."

Similarly, another leader Rajendra Mahato said party registration was natural as various six parties were unified into a single one.