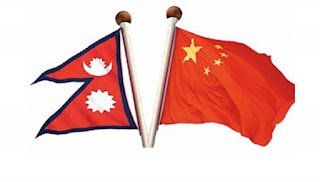 Kathmandu, June 20: The 11th meeting of the Joint Consultation Mechanism between the Ministries of Foreign Affairs of Nepal and the People's Republic of China held here Tuesday reviewed the status of Nepal-China relations and assessed the progress made in the implementation of agreements/MoUs reached between the two sides in the past.

During the meeting held at the Foreign Ministry, the two sides expressed commitment to further promote cooperation in mutually agreed areas. Both sides also agreed to work in realization of economic opportunities available for mutual benefits.

On the occasion, the Nepali side expressed hope that cross-border connectivity, infrastructure development, diversification of Nepal's trade, promotion of investment and tourism would receive priority in the implementation of the MoU on cooperation under the Belt and Road Initiative signed by the two sides on 12 May 2017.

The Nepali side also emphasized the need of early resumption of Tatopani-Zhangmu border point. The Chinese side responded positively on Nepal's proposal.

Both sides discussed the ways to further enhance coordination and facilitation for the promotion of Nepal's tourism prospects in China in the context of the Chinese Government's announcement of the year 2017 as 'Nepal's Tourism Promotion Year in China'.

He will visit the reconstruction projects in Kathmandu being implemented under the Chinese grant assistance.

During the meeting, the Foreign Secretary of Nepal led a 21-member Nepali delegation comprising the senior officials from the Ministry of Foreign Affairs as well as the representatives of other Ministries and agencies of the Government of Nepal.

The Vice Minister led a 12-member Chinese delegation comprising the Ambassador of China to Nepal Yu Hong and other senior officials of the Ministry of Foreign Affairs of China and the Chinese Embassy in Kathmandu.

Kong and his delegation arrived in Kathmandu on 19 June 2017 to attend the Meeting and will depart for Beijing on 22 June 2017.

The Joint Consultation Mechanism was set up in 1996 as a platform for discussing the matters of mutual concerns and cooperation at the senior officials’ level between the Foreign Ministries of Nepal and China.