UDMF withdraws its support to government

The United Democratic Madhesi Front (UDMF), expressing grudges for long and intensifying it especially after the Rajbiraj incident, has finally decided to withdraw its support to the government.

A meeting of the UDMF held at the party office of the Tarai Madhes Loktantrik Party at Bijulibazaar on Tuesday took the decision in this regard, said General Secretary of the National Madhes Socialist Party, Keshav Jha. 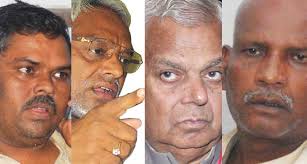 A total of 49 lawmakers of seven different parties associated with the UDMF are representing in the Legislature-Parliament. A meeting of the Federal Alliance held on March 7 had asked the government to pass the constitution amendment proposal with some revisions and to withdraw the decision on election of local levels within a week.

The UDMF said that it withdrew the support to the government from today itself, saying the government did not take any initiative to address their demands.