Home » English » 'UDMF to announce on pulling out from incumbent government'

'UDMF to announce on pulling out from incumbent government' 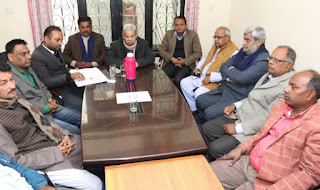 Kathmandu, March 15:  A lawmaker from the United Democratic Madhesi Front (UDMF), in a parliament meeting today, announced that the Front had decided to pull back its support for the incumbent government and it would formally apprise the Speaker about this.

Parliamentarian Mahendra Raya Yadav of Tarai Madhes Loktantrik Party said the support was withdrawn as the 3-point agreement forged in course of formation of the incumbent government was not implemented. Then he announced a boycott of the today's meeting.

No sooner parliamentarian Yadav shared that the UDMF would boycott today's meeting in the parliament, parliamentarians from Federal Socialist Forum Nepal, Federal Samajbadi Party among other disgruntled Madhesh-centric parties walked out of the meeting hall in a gesture of boycott.

The Madhesh-centric parties want the endorsement of constitution amendment bill registered at the Legislature-Parliament before holding local body's poll on May 14 this year.

Attention of the government on the same and other contemporary issues was drawn by other parliamentarians as Rewati Raman Bhandari, Prem Suwal and Lokmani Dhakal.