Poudel hopeful of logical end to talks with Madhes-centric parties

Kathmandu, March 14: Nepali Congress senior leader Ramchandra Poudel has expressed his belief that political talks underway with the Tarai/Madhes-centric parties for the participation of all political parties in the upcoming local election would reach to a logical conclusion soon. 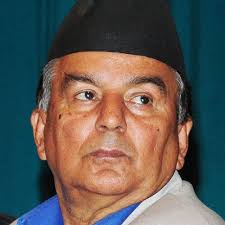 During his meeting with China's Ambassador for Nepal Yu Hong at his private residence Boharatar today, leader Poudel assured that demands of Madhes regarding the constitution would be addressed soon through an amendment.

The constitution amendment would be carried out at consent and collective efforts of all political parties, he said, hoping the election, a process of enforcing the constitution, would contribute to bring further political stability to the country, according to his Chiranjibi Adhikari.

On the occasion, the Chinese Ambassador put her concerns about latest' political situation in Nepal.