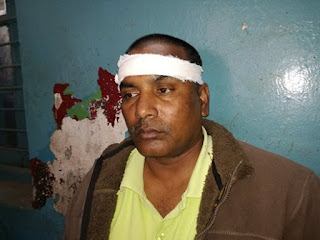 Dhanusha, Feb 23: Chairman of Radio Janakpur, Shital Saha, was injured in an attack by the cadres belonging to agitating Madhesi front here today.

Saha was returning to office after news reporting about the picketing of the residence of UML leader Raghubir Mahaseth when the Front cadres attacked him with weapons. He has been admitted to Janakpur Zonal Hospital for treatment.

Earlier, the cadres of the agitating Front vandalized the house of leader Mahaseth.


Similarly, senior leader of the UML, Bam Dev Gautam was gheraoed by the irate cadres. It resulted in a clash between the cadres of the UML and Madhesi Front.
Raju Saha and Kul Dip Saha of Sadbhavana Party were injured in the clash. They have also been undergoing treatment at Janakpur Hospital.

In response to government's announcement of local election, the Madhes-centric parties launched agitation and showed aggression on why the constitution amendment was not prioritized. They called the Madhes banda (general shutdown) today.