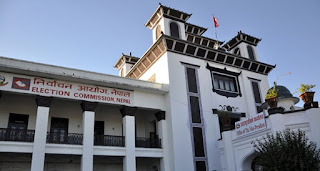 , Feb 23: After two days of the government's announcement of the date for local elections, the Election Commission on Wednesday made public the election programme.

As per the schedule, the voting time on the voting day is fixed from 7:00 am to 5:00 pm on May 14. With the announcement of election programme, the EC issued a 19-point directive seeking government's help.

All government bodies, public agencies and committees, educational institutions the EC has written have been urged to give top priority to the election and fully implement the election code of conduct.

These bodies, agencies, committees, institutions have been directed to provide their updated data on number of employees within a week they get a letter from the EC.

The government bodies and agencies, security offices have been urged to extended respective support ranging from human resources and infrastructural arrangement and facilities.

The government is also directed to manage security to political candidates, and voters in order to ensure free, fair and credible election.

The educational institutions have been requested to halt teaching learning activities from May 8.

Similarly, the State-run media- Nepal Television, Gorkhapatra daily, The Rising Nepal, National News Agency (RSS), and Radio Nepal- have been urged to give top priority to the news relating to the elections and EC activities.

Filing of candidacy at office of election officer, village unit/municipality from 10 am to 17 pm on April 29

Publication of the name list of those filing candidacy on April 29 at 17:30

Checking of candidacy filing on April 30 and May 1

Publishing name list of the nominated candidate on May 1 at 13:00 pm

Withdrawal of candidacy on May 1

Publishing of final names of candidates on May 2

Allocation of election symbol on May 2

According to EC, those eligible to vote should have crossed 18 years by February 20, 2017.