DESIRE to DATE and DISFIGURE

Rukesh Yadav
Love and acid attacks: they are shockingly two opposite extremes. How does this flipping take place? Why a godly act turns devilish? I will try to go into these aspects as far as I can. For this here, I am taking reference from a number of published articles amalgamating with my own experience of love and hatred.
Dear reader, you can agree/disagree with the contents. With this, we can begin a discussion. Please, give your opinion.
We all at some point fall in love and savour the sacred feeling of love. Some of us make it to the end while many of us can not make it. Some relationships end with betrayal and some with misunderstanding; some go haywire simply because of immaturity and shallow perspective. Rarely, we make it alright in first attempt. Some are denied downright. But what shocks me personally is a lover turning into savage criminal. We start liking someone. With this, we have all the good feelings for her. We feel warmth and elated. A very secret life happens in our psyche. It all begins with this. Then, with some of us, there goes something wrong. Does that wrong happen to be that big,  that it turns a lover into an acid attacker?
According to Wikipedia,  acid attack is a form of violent assault defined as the act of throwing acid or a similarly corrosive substance onto the body of another with the intention to disfigure, maim, torture, or kill. I wonder if an acid thrower actually does know what harm can it do!
Lets see what the Wikipedia says about love: Romantic love usually implies an expression of one's strong romantic love or one's deep and strong emotional desires to connect with another person intimately or romantically. Amazing! More I wonder here if an acid thrower has really loved!
Withe these two definitions, we can clearly see the gap between these two sentiments. So, the question is what actually creates this gap?
Acid attacks have been used as a form of revenge for refusal of sexual advances, proposals of marriage and demands for dowry. The problem we see is in schooling of how we see and perceive love and women. Naturally, we fall for someone. We are sexually attracted. First few days of feelings are pure and natural just an urge out of instincts. Then we start we pulling off all the differences and superiority that we have been brought up through. All the calculation begins with the perspective what women mean to us, our strength, our position and all that. There remains nothing natural. Afterwards, the love becomes more of a cultural act. If it is natural throughout, we will look for someone else after denial. But it does not happen so. It becomes a thing of our superiority and and ego. Just to satiate the ego, we want to destroy the very person. It is an extreme way to avenge. This comes not simply because someone denies our proposal or cheats on us but because we see the person as a goal to be achieved, and object to be possessed. When we can not accomplish, we feel low and inferior. And just to feel better, we do this horrendous act of acid throwing. Why don't we choose a milder way to avenge?
Just a couple of weeks ago, a 27-yr-old girl was killed in an acid attack in Butwal for spurning the marriage proposal. The attacker was her alleged boyfriend.
Such grisly incident should not be simply seen as linear cause and effect act as, the boy attacked her because she turned down his proposal. This indicates his upbringing. It says something about his environment he has been brought up in. It clearly depicts his mindset regarding women. It is extremely gruesome selfish act. Assume that he was madly in love with her and so was she with him; they had pledged to get married but after a course of time, she felt she should not marry him and so she turned down. Now what? Is she to be killed? Yes, she is to be killed if she is a tool to finish a work, for in the middle of the work she refused to function properly which infuriated him. A person in LOVE does not  get angry enough to commit a felony over a refusal or betrayal, instead feels badly hurt and disappointed, becomes depressed and obsessed. But anger is quite a different thing. It is not synonymous to disappointment or feelings of hurt. Anger only surfaces when we are committed to achieve something but in the process, our means falls short or goes defunct. It is because we have no attachment with the means. All we know is we want to use them to achieve the specific goal. Now, if we compare it with the so called love and acid attack, we vividly find that she was never treated as a living soul similar to himself. She was means and not the end. Where does this mentality come from? It depends on how you see other people in your family or locality or group of friends treat the females, what is their views about women and so forth. This shapes your mind. Here, the perpetrator looks down upon females and sees them weaker. He does not consider them on the same footing with himself, instead poor creatures. So, it can be categorized as a gender violence.
But why acid and not something else? 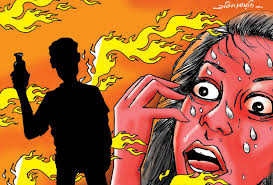