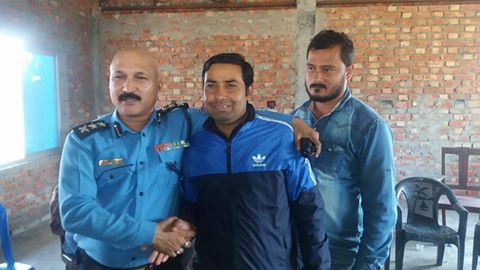 SP Lohani met with the journalists at the Federation of Nepali Journalists (FNJ) Saptari Chapter Assembly Hall in Rajbiraj and expressed his regret over his action. "I pledge towards always remaining committed to the security of journalists and press freedom, and not allow such incidents to repeat in coming days," the police official said.

SP Lohani had manhandled and misbehaved with half a dozen journalists including FNJ Saptari Chapter Working Committee member, Chandan Yadav, who were assigned to cover the news of the visit of famous Indian Yoga Guru, Swami Ramdev Baba, on November 26.

In protest of the incident, journalists submitted a memorandum to the Home Minister issuing a 48-hour ultimatum for his transfer. The journalists were forced to launch phase-wise agitation a week before when the concerned authorities turned their backs to the demand.

The FNJ Saptari Chapter has expressed gratitude towards all organizations that have lent their support during the agitation.